Today we continue to work with the same skills and passion as when we started in 1945, following every stage in production to guarantee the goodness of our products.

Oil has a fascination that comes from its direct relationship with the land, with the olive trees that cling to the soil, fertile for centuries, producing thousands of olives that are exuberantly offered to the sun, almost with joy. Since the beginnings of the company, from the small mill
through to the present ultra-modern industrial facility, we have had a single aim: to make a good product, focusing on the intrinsic characteristics of the highest level, and on the constancy of its quality and flavour. This is not just for commercial reasons. We are passionate about what we do.

Thanks to our constant research into achieving total control of product quality, we have been the recipients of various awards of prestige, including the Ercole d’Oro.

A journey built on passion and success.

It all began in 1945, when Cavalier Giovanni Arioli founded an individual company. After a few years, in 1948, he established a trading company for food-grade vegetable oils, adding the Perugia and Trasimeno brands, which he sold in Umbria and the adjoining regions. 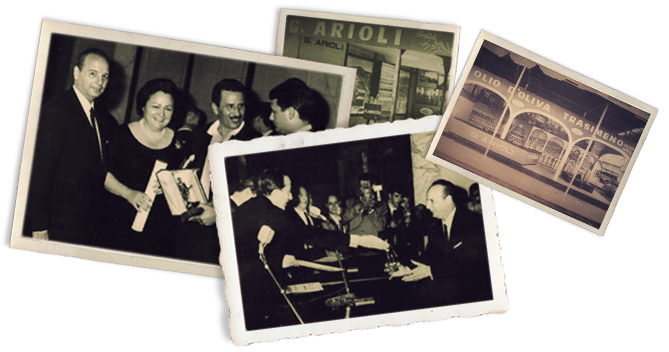 His sons, Dante and Nazzareno joined the company towards the end of the 1960s, when it was transformed into Oleificio Trasimeno srl.

Continuous developments in the market led to the use of the first forms of advertising in order to extend the company’s reputation and name.

During the 1960s, the company expanded its sales over the country, covering the centre and north of Italy.

Towards the late 1970s, new olive growing areas were created in the area of Castelli Romani, for constant research into quality, flavour and the natural goodness for our oil.

In 1985, the new company headquarters were inaugurated at the Campoleone Estate, at the foot of Castelli Romani. In the late ‘90s, grandchildren Alessandro, Andrea and Giovanni Arioli, joined the company, giving it a new hallmark, and successfully exporting products all over Europe, the East, South America and Russia.